The lyrics of this song make me think of a metaphor for Lolita being put on a pedestal by Humbert Humbert as if she is performing for him because he romanticizes her to no end. All the people in Lolita's life (specifically her mother and father) are deceased, so she has no one to love her like she deserves be loved. Vaughn Monroe mentions that people are missing in the audience, and for Lolita the character's sake, the people missing are her parents. For ​Lolita the novel's sake, the audience are the readers of the novel. Year: 1948
​
The lyrics of this song remind me of Humbert's delusion that Lolita "likes" him or is attracted to him. It has the potential of representing the fantasy life he pictures for him and Lolita. The lyrics of the song could also represent Humbert's justifications for what he is doing and how it isn't wrong, how people just "don't understand" him and what he wants. Again, a romanticized life of him and Lolita. Year: 1951
​
This song reminds me of Charlotte and the ideal image she had for Humbert. The lyrics also remind me of what Charlotte could have felt when writing her letter to Humbert or it could represent his attitude toward Lolita and how much he "loved" her, how much he "adored" her and wanted her. It could be his overall attitude throughout the entire novel because even when talking about his past he mentions Lolita/addresses Lolita. Year: 1952 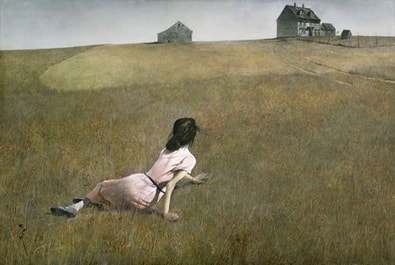 < Christina's World, Andrew Wyeth (1948)
This painting appears in the 2016 British film, ​War on Everyone, during a scene where one of the characters looks at a replica hanging on a wall in another's house, and comments: "It's kinda creepy. It's like something bad's gonna happen but there's nothing she can do about it." This interpretation of the image relates to Lolita's character because she is in a situation where she has no power - and Humbert always reminds her of that. Relative to Lolita, I see it as Lolita desperately trying to have a normal life. She wants to go back to the life she had before Humbert destroyed it. 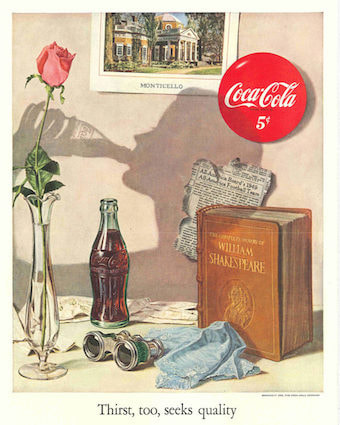 This Coca-Cola advertisement (1949) could be representative of the American culture that Lolita herself represents. The advertisement also includes many depictions of the novel.
The Coca-Cola bottle: American culture, how Humbert views Americans
William Shakespeare (book): Education, how Humbert wants Lolita to be educated
Monticello Poster: Lolita and Humbert's cross-country trip, major sights to see in the United States
Pink Rose: Innocence, Humbert's obsession with Lolita is because of her youth
Newspaper Clipping: Humbert typically reads a newspaper while watching nymphets
Shadow of Woman: Lolita

November 7, 1952
Obvious to anyone who has read the novel, Lolita loves comics. This relates directly to the comics/funnies she would read whenever she had downtime. Another reason this stood out to me was the text of the comic. In the case of this strip, Humbert Humbert is Charlie Brown and Lolita is Lucy. Lolita's mother, Charlotte, always complained to Humbert about Lolita being a brat.

Southern Times (Houston, Tex.), Vol. 4, No. 22, Ed. 1 Thursday, February 19, 1948.
The first part of this newspaper clipping is what I can only assume is a joke. The joke reminded me of Lolita because of Humbert's view on women. He does not have any desire for a woman, if anything he despises them. He does not respect the female gender past the age of 14 and even prior to that he does not respect them, he just lusts after them no matter what the child's wishes are.

The second part of the newspaper clipping reminds me of Lolita and Humbert's cross-country road trip. Since the pair were never really stationary, they constantly had to find road stops or random cafes throughout the country. The reason this advertisement stuck out to me so much was the time the cafe opened. 5AM is quite early to be serving breakfast unless there are many travelers trying to start their trips early. It could also mean that there are people locally who have early days, perhaps for work. Another thing that stuck out to me was the image. The father is sitting next to the daughter with a smile on his face while the daughter eats without emotion. It is quite eerie if you look for too long. 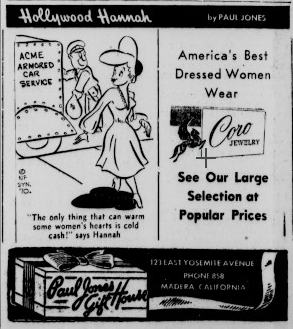 Madera Tribune, Vol. 17, No. 168, January 20, 1950
This newspaper clipping reminds me of all the times Humbert used new clothes and new items to keep Lolita quiet. It particularly reminds me of the one of the final moments Lolita and Humbert are seen together in the novel. The image of the woman walking past the man reminds me of when Lolita went to speak to Quilty when Humbert was examining the sale at the local boutique.